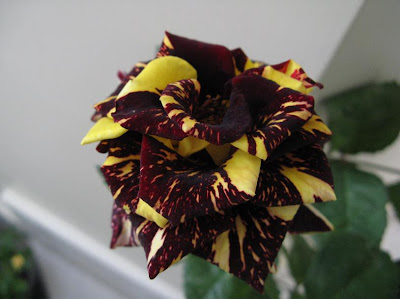 This a kind of rose flower in our yard. In Persian, this is called Jamileh, I do not know about its English name
For my next giving project, I need 1 week free time to finish it. I'll come back soon friends ;)
Posted by Sarah at 1:35 PM 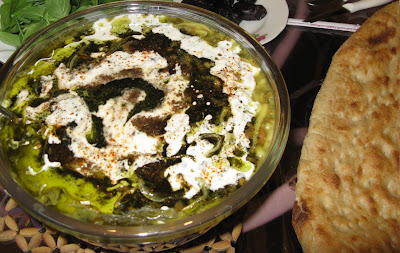 At the photo, you can see a bowl of Ash-e-Reshteh with bread, basil and date that we had for the Eftar ( for breaking our fast)

This is the second day of Ramazan and the second year that I experience fasting at the hot days of summer. You may think this is so difficult but actually this not. I can describe the good feeling that I have...
I had some posts about Ramazan month that you can see by clicking here!
Posted by Sarah at 10:26 PM 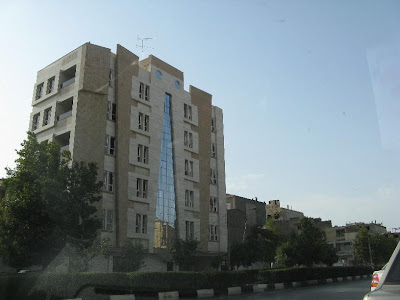 The building is located on Faramarz Abbasi BLVD 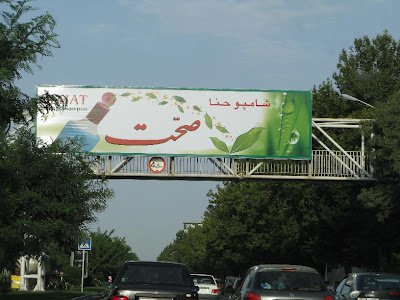 I wonder that how advertisements foll people! Experience this Henna shampoo destroyed all my imaginations!!
So let's not believe somethings!
Posted by Sarah at 9:49 PM 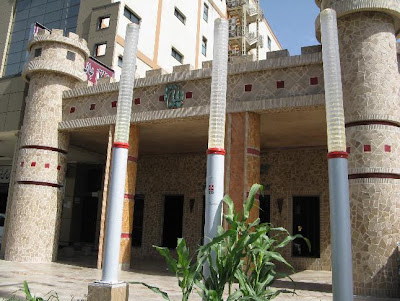 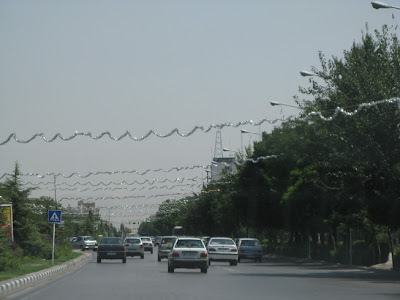 Still we can see the decorations of this main street for Sha'ban celebration...
Posted by Sarah at 7:16 PM 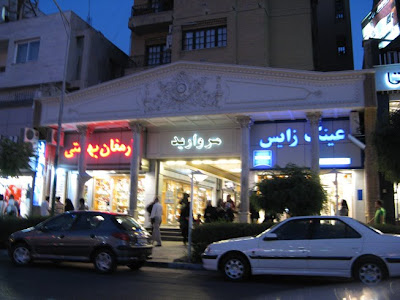 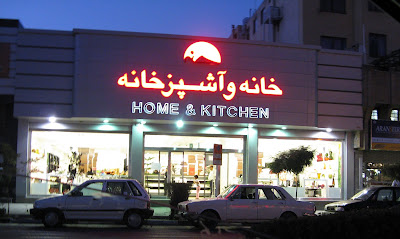 One of the habit of Iranian women is shopping for the house, though sometimes they lavish!!!
Home & Kitchen is one of the famous markets in Mashhad with many favorites for a Persian woman!
Posted by Sarah at 6:10 PM

That's a piece of Persian Art ! 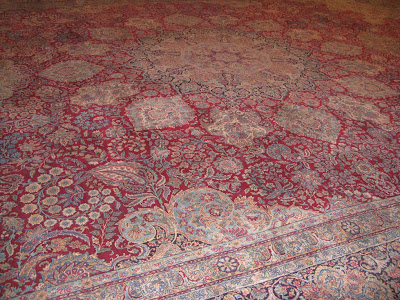 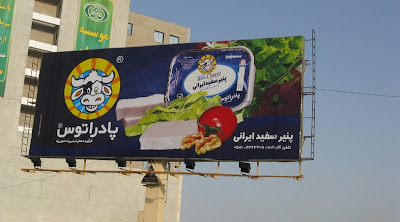 A peace of white cheese, some walnut, some slices of tomato with vegetables… Then a cup of tea with honey!
That's a complete Persian breakfast which is my favorite!
The text you can see on the bill board says about "Paadra Toos" dairy which is one of the famous factories in Mashhad.
Posted by Sarah at 4:53 PM

A new Commercial Center in our neighbourhood 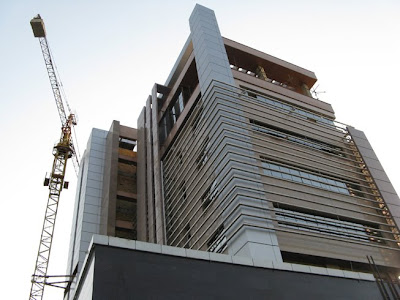 A new building still under construction, in Janbaz blvd, near our house. Yet, it does not have any name. I appreciate the architecture...
Posted by Sarah at 7:24 PM

An Apartment in Sajjad Street 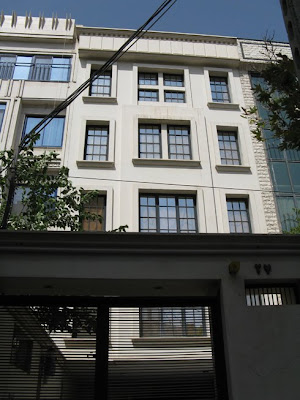 You probably like to know about house shapes in Iran specially in Mashhad. As you see in the photo, most of people live in apartments. the maximum floors for apartments in Mashhad is usually 5 floors. This unit is depends on the street and city and may be different in other places of Iran.
The families that live in apartments often have good relation with each other. They sometimes plan gathering party in the yard or under a bower. The culture of living friendly is really improved in Iran.
Posted by Sarah at 7:27 PM 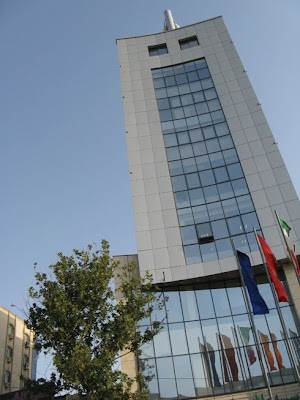 When a baby tries to be Independent ! 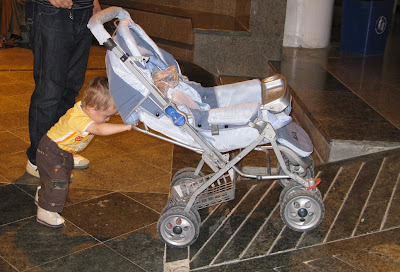 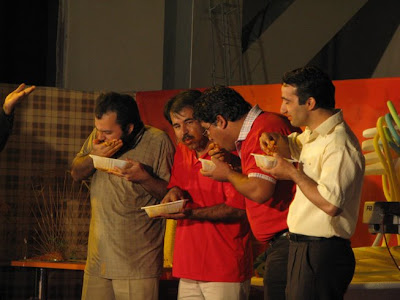 Eating Spaghetti competition (It was veryyy awful to watch)

Excuse me for 1 day absence on the blog. I've got a very bad flu and could not even sit and write a post.
Last night we went to the "spaghetti festival" as planed to take part for the spaghetti structure competition And I won the prize of the most beautiful structure :)
The prize was not as something I supposed on my mind, any way not bad. A big set of Pyrex Dishes for serving pasta with a very huge box of spaghetti!
Posted by Sarah at 1:31 PM 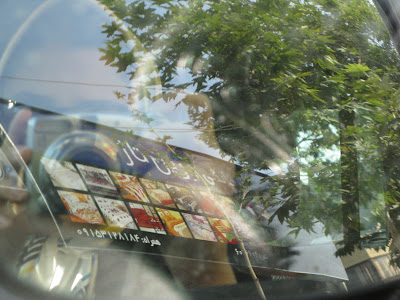 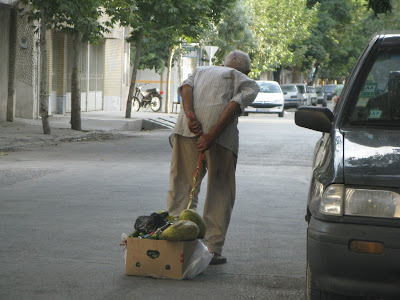 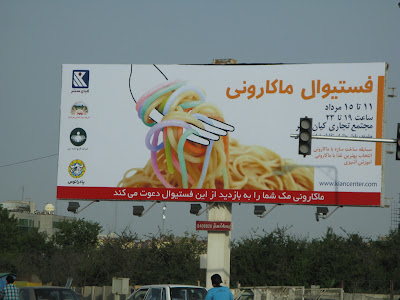 The advertisement says about a Spaghetti festival in the Kian Center. Building spaghetti structures which is my favorite is one the programs of this festival. Then cooking the best food with macaroni and teaching how to cook are the other ones!
You may remember my spaghetti Eiffel Tower, I will take part in the competition of spaghetti structures with the Eiffel Tower of mine on Thursday, so please come here again if you like to know the result ;)
Posted by Sarah at 9:05 AM 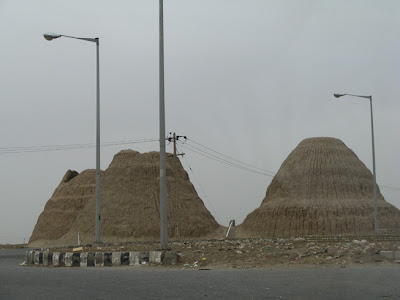 These are the heritages from many years ago in a place near Mashhad.
According to the Wikipedia:
A yakh-chāl (meaning "ice pit") is an ancient type of refrigerator.
Above ground, the structure had a domed shape, but had a subterranean storage space; it was often used to store ice, but sometimes was used to store food as well. The subterranean space coupled with the thick heat-resistant construction material insulated the storage space year round. These structures were mainly built and used in Persia. Many remain standing that were built hundreds of years ago.
In 400 BC Iran, Persian engineers had already mastered the technique of storing ice in the middle of summer in the desert. The ice was brought in during the winters from nearby mountains in bulk amounts, and stored in a specially designed, passively cooled refrigerator, called a yakhchal (meaning ice pit). This was a large underground space (up to 5000 m³) that had thick walls (at least two meters at the base) made out of a special mortar called sārooj, composed of sand, clay, egg whites, lime, goat hair, and ash in specific proportions, and which was resistant to heat transfer. This mixture was thought to be completely water impenetrable. The space often had access to a Qanat, and often contained a system of windcatchers that could easily bring temperatures inside the space down to frigid levels in summer days. The ice was then used to chill treats for royalty during hot summer days and to make faloodeh, the traditional Persian frozen dessert. 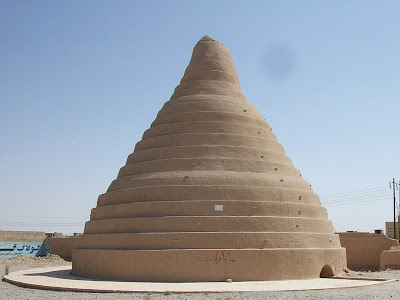 The Yakchal in Kerman is located about a mile from the center of the city. This cone-shaped building is about sixty feet high. The massive insulation and the continuous cooling waters that spiral down its side keep the ice stored there in winter frozen throughout the summer. These ice houses used in desert towns from antiquity have a trench at the bottom to catch what water does melt from the ice and allow it to refreeze during the cold desert nights. The ice is broken up and moved to caverns deep in the ground. As more water runs into the trench the process is repeated. Often seen around the ice houses and many of the homes in the desert are towers called badgirs or wind traps. Built of mud or mud brick, these badgirs, mentioned by Marco Polo, are square or round, but the operating principle is the same: to catch the slightest breeze in the vents at the top and to funnel the cooling air down through internal, vertically placed wooded slats to the water or dwelling below.
In present day Iran the term yakchal is also used to refer to modern refrigerators. 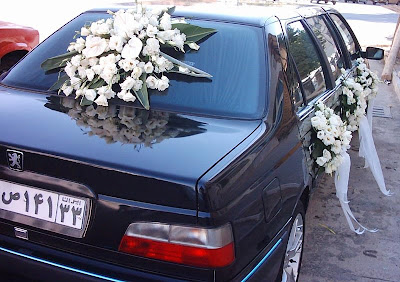